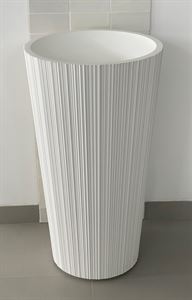 Elegant and contemporary, vibrant with reflections and able to enhance simple and linear shapes or surfaces, smooth or articulated surfaces, wrapping them and enhancing their three-dimensionality. The new finish developed byantoniolupi for Flumood gives materiality to the volumes, giving them a feeling of precious solidity. The objects change their appearance through the underlining of some details, they acquire a new identity thanks to the alternation of colors, they embellish their iconic image with a new and sparkling look.

A special painting with metal powder, a technologically advanced process that allows to deposit microparticles of real metal on the surface of the elements. A spray application that requires specific know-how and a "know-how" that is in antoniolupi's DNA, a process that allows the finish to be homogeneous, allows every small detail to be perfectly covered, a technology that gives a resistant armor and refined to the elements made of flumood. From the natural uniqueness of marble to the versatility of an artificial material, without distorting the essence of the project, without losing the elegance of the gesture and the proportional balance of the whole. A change of material that enhances the project concept by validating the initial choices. Plissè is the freestanding washbasin designed by Paolo Ulian and produced by antoniolupioriginally in marble which is now also available in the Flumood version. It is not just a new version but an approach that overturns the creative gesture or rather reaches the form through an opposite process of realization. While on the one hand the grooves of the marble obtained through the subtraction operation in which the wall of the material was removed,

The result is a delicate and apparently casual texture, explicit reference to the textile world from which the project originates, a surface that seems to move lightly thanks to the varying light and the play of light and shadow determined by the relief effect. A three-dimensionality that is embellished in this version by the deliberate irregularity of the grooves that refers to the idea of ​​an artisan production made of unique and unrepeatable pieces.WHITE PROPOSAL VERSION.